Juniper Lee Wiki
Register
Don't have an account?
Sign In
Advertisement
in: One Shot Antagonists, Demons, Female Characters,
and 4 more 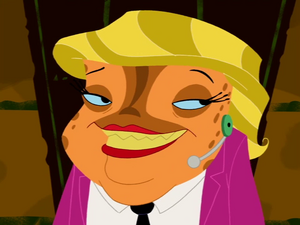 Vikki Devyne is an Agent Demon from the Underworld. She is the main antagonist of It's the Great Pumpkin, Juniper Lee being the cause of that episode's problems. She likes her smoothies in a very specific way.

Vikki is an agent demon who makes a deal with the monster kid Evan Thompson to make his Halloween/spell longer. This unfortunately affects the entire monster kid population, prompting all of their parents to take action and go directly to Te Xuan Ze Juniper Lee. Juniper goes to Vikki to undo the spell, but Vikki declines the request as it is a done deal. When June offers her another deal and Vikki just so happens to run out of good smoothies, she agrees to undo it if June gets her a specific smoothie before the clock strikes twelve. This leads to Juniper going a wild goose chase around the various magical realms.

Vikki appears to be a slug-like demon, with blonde hair, orange skin and toothy smile. She wears a pink business suit and is almost always on the phone line with someone.