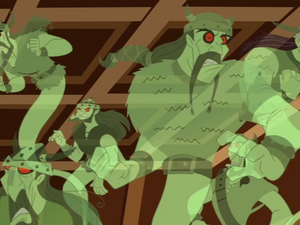 The Viking ghosts of Takar are spirits stuck in the Medallion of Takar which was split in two, presumably to prevent them from escaping. The vikings were searching for the other half of it to make their residence in the bodies of the children they possessed indefinitely permanent. According to Monroe, when the medallion is re-united and brought together at the right time and cast into the volcano of Takar, it should have somehow solved the viking spirits' situation of being stuck in a medallion for eternity. Looking for a faster way to save her friends, Juniper instead destroys this medallion to release the spirits from the world of the living and thus, from the bodies of her friends and classmates.

They appear in It Takes a Pillage as the main antagonists.

The Viking Ghosts being excised from June's friends and classmates.
Community content is available under CC-BY-SA unless otherwise noted.
Advertisement