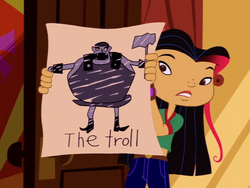 Trelleckians are the guardian jailors of the trickster god Loki. They are trolls tasked with keeping Loki in check every few hundred years to prevent him from escaping his imprisonment in Orchid Bay cemetery.

In New Trickster in Town, June banishes a few of them just as they are in the process of doing so, mistaking them for random tomb-trashing trolls.

Without them guarding portal-ways where Loki could come through, it was possible for him to make almost a complete come-back. When other monsters heard that June had banished the trolls on accident, they became completely panicked and distraught, Gus even stating that they are doomed.

According to Monroe, only an immortal can get rid of Loki completely, so it can be assumed that the trolls might be immortal. At the end of the same episode, Thor summons a few new ones to banish Loki again.
When we see them in the episode, they have blue skin, wear green tunics and have red hair.

As cited by Jasmine, the Trelleckians are one in just a handful of blue trolls and that there haven't been any blue troll sightings in a long time. They have pointy ears and misplaced or missing teeth. They carry hammers and are dressed similar to depictions of Scandinavian mythology.