Thor also known as T-Money is the Nordic god of thunder and the older brother of Loki as well as the paternal uncle of Taylor Evermore. Thor is a prominently mentioned god throughout the recorded history of Germanic and Scandinavian peoples. He was the son of the Allfather Odin, King of the Gods.

In Nordic mythology, Thor was the companion of his own realm of Asgard and protector to the realm of Midgard (Earth) and came to the aid of the humans whenever he was needed. In the show, when Loki invaded Orchid Bay City, Juniper Lee summoned him to help combat the evil god and save the world from being consumed by darkness. After he returns his brother to banishment, and restores the magical balance, he gives June his card and tells her that if she ever needs anything to just give him a call. Thor returns in season three when he pursues a Vindolf Hobgoblin to her school which it is hiding in. If the Vindolf Hobgoblin isn't found as soon as possible, Thor will destroy the school to take out the monster.

The Mjölnir in the show is used by Thor to summon lightning, the Trellekian Trolls needed for Loki's banishment and for huge displays of power. It seems heavy enough to do some real damage when he intends to use it to destroy Orchid Bay Middle School but as shown by June, it is possible to stop it with Te Xuan Ze strength. 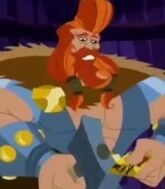 Thor Without his helmet