The World According to L.A.R.P.

The World According to L.A.R.P.

The World According to L.A.R.P. is the ninth episode of season 1 of the whole series.

June's older brother Dennis gets kidnapped by demons but thinks it's a Live Action Role-Play campaign.

June stops a small demon from stealing a goblet in the forest. A few demons observe this and plot to get hold of the goblet.

Dennis is loaning things from June's room for the L.A.R.P. campaign led by him, unaware that they are real magical items. When June finds the from their house basement, she orders the out of it for stealing her stuff. Dennis' friends complain about the lameness of the campaign and their self-appointed president Donnie promises to hold the coolest one yet. When Dennis goes to take take more of June's 'junk', he accidentally puts on an amulet allowing him to see two Pirados Demons about to grab him. The demons are confused because they thought one of the brothers couldn't see him and decide to grab Dennis anyway, but not before he scares them with some of the real magical items he grabbed from June's shelves. They leave a "note for the Te Xuan Ze," unaware that the note is destroyed by a jar monster as soon as they leave the room.

The demons take Dennis to their boss Maret, who is after the Goblet of Nesteer, and aims to trade the goblet for June's brother, but is disappointed that it is the wrong brother. Dennis on the other hand is excited about a campaign so real-looking, he "plays along" and leads the demons astray while using June's magical items.

June discovers that her rooms been ransacked and she when finds out that it's the Pirados Demons, they go to the Whammie Elves for information. Maret is fed up with Dennis' antics and demands his henchmen to get info on the Te Xuan Ze's whereabouts to finally get Dennis out of their cave and out of their hair.

The Pirados Demons show up at the movie theater as well, negotiating a deal with the Whammie Elves, just as the elves had said and June catches them. Before landing a punch however, they threaten that they have her brother, and want the Goblet of Nesteer for him - one of the demons whispers thhat between them, he would honestly trade him for a VCR.") Ray Ray points to himself saying he's right there but they exclaim they mean the other brother and for the Te Xuan Ze to meet at a specific place an time to retrieve him.

Just when Dennis has grated Maret's nerves just enough to make the demon aggravated enough to give up on the search for the goblet which Maret's been looking for three and a half, Dennis taunts him with the Goblet but the demon grabs it an gulps it down, making himself bigger and scarier. A rope appears to take Dennis away and June jumps in to fight Maret, who shows off the effects of the goblet. After a small fight, she punches the goblet straight out of his stomach. She bonks Maret on the head and threatens that if he ever comes near her family again, "they're gonna a need a tenth-level locator spell just to find what's left of him".

Fter helping June convince Dennis that it had really been an elaborate role-play campaign and to never speak of it again, the Pirados demons are given a ticket to Fresno, just as they had feared. June and Ray Ray talk about how well Dennis handled himself despite no real experience or knowledge of magic, concluding that he is still a dork despite this.

There's a new L.A.R.P. campaign and Dennis is confused why it's at an abandoned house when the previous one was so awesome. The kids get chased away as it turns out the house wasn't as abandoned as they thought. 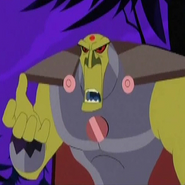 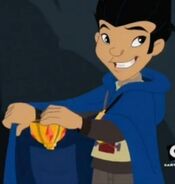 Dennis hiding the Goblet of Nesteer.

Whammie Elves at work under the theater.

Ray Ray dusting Dennis with knock-out dust, so he doesn't see that he and Monroe saved Dennis.