The Life & Times of Juniper Lee 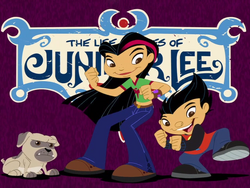 The series centers on the life of a pre-teen girl, named Juniper Lee, who lives in Orchid Bay City. Based on Winick's adopted hometown of San Francisco, California, the city is a hub for magical activity and is filled with various monsters and demons, both good and evil. The magic and human worlds have been separated by a magical barrier, known as "The Veil," which prevents ordinary humans from seeing any magic-related events or the creatures related to them. Juniper has recently been made the new Te Xuan Ze, the protector and the keeper of the balance between the human and magic worlds. To accomplish her task, she has been magically enhanced, making her far stronger and faster than ordinary humans. She can also use various kinds of magic to assist her. Maintaining the balance often interferes with her personal life, including her schoolwork and her social life, but she always manages to keep everything flowing. The show has a fairly campy and light-hearted take on the genre, often makes fun of itself, and rarely seems to take itself seriously.

Winick has stated that Juniper Lee was inspired by both The Simpsons and Buffy the Vampire Slayer. Juniper does follow in the footsteps of Buffy, as stated in the quote below:

Interviewer: We’ve touched on just about everything else, so hit us with the high concept. Sum up the show for us…
Judd: I’m sounding like a broken record, but it's kind of like Buffy the Vampire Slayer meets The Simpsons. That's the simplest way to put it. At the end of the day, it's about a little girl who fights monsters. There's a rather massive back story to the whole thing, which really provides a spine to build from. I've only tapped into it a little in the show, but for me, knowing it's there is important. The show needs a spine, and needs a place to work from.