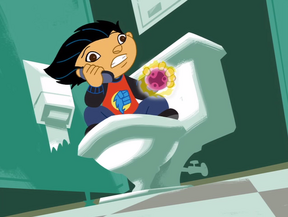 A Ronak stone is a magical item used for banishment spells. It has a three-pronged symbol in the middle, each of which have a round dot between them. It is usually pink and glows yellow while in the light in can be slightly transparent.

Ray Ray uses a similar item calling it a "Ronak stone" in "The Kids Stay in the Picture" which shoots out projectiles. It can be assumed that these projectiles transport the target to immediate banishment. Usually, banishing transports the person aimed at to magical banishment, which according to Monroe is a place of "eternal anguish".

This stone has been used for banishment and projectiles in the first two seasons but in season three's "Little Big Mah", we see Monroe use it to see what Jasmine's magical aura looked like next to June's.