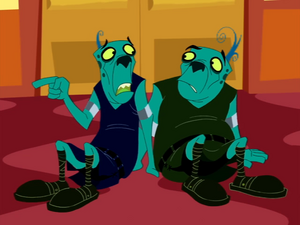 The Piradós demons were two demons who were hired by Maret as his henchmen, to kidnap Juniper's younger brother Ray Ray to extort her to give them the Goblet of Nesteer which Maret tried to steal earlier with the help of a karate hench-monster. While at her room though, they accidentally grab Dennis, mistaking him for Ray Ray just as he dons a stone allowing him to see magic.

These two were sent to Fresno on a bus, with June telling them to never appear in Orchid Bay again but there have been other similar demons appearing in episodes since. Many Pirados demons supposedly make deals with Whammie Elves.

The demons are named Doni and Goot.

Other Pirados Demons also appear in the show, most notably two who helped Steven escape the human world in "Dream Date".