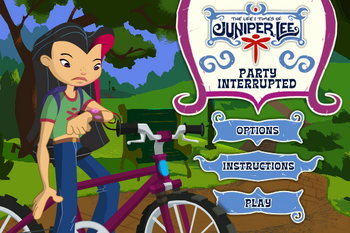 Party interrupted was the first online game to be made based on the show and is specifically based on the first episode of season one, It's My Party and I'll Whine if I Want To.

The game that came out after this one was Monster Mayhem.

While you were having fun at Jody's birthday party, you received the news that the Racatan was loose. You must reach the woods and save the city from the clutches of that giant hamster.

Travel with your bicycle across the difficult roads of the woods to find the Racatan. Try to complete the level in time avoiding the obstacles.

Jump over obstacles to reach the Racatan, then use the same keys in the next level, surfing the Racatan.

There seems to be just one level and at the end of it, the player must defeat the Racatan by sliding it down a large hill, similar to the show.

The world can breathe once again... With the Racatan defeated, Juniper can now return to the Party.

Try again to free the world from the clutches of the Racatan so that you can return to the Party.