Out of the Past

Out of the Past

September 29, 2006
Out of the Past is the thirty-third episode of The Life and Times of Juniper Lee and the seventh episode of season three.

A former Te Xuan Ze named is Kai Yee who became a traitor, is freed from being a statue thanks to the DaPheetes company and once again attempts to destroy the orb that gives life to the Magical Elders who empower both Juniper and Ah-Mah making him stronger, which means it's up to both of them to stop him once and for all. Juniper and Jasmine have aid from the magical source of the Elders to defeat the most evil of all Te Xuan Ze. But will it be enough?

The most dangerous and greatest of Te Xuan Ze that has ever lived by the name of Kai Yee is released from his stone imprisonment by a monster footwear company, who hope to use him for advertisement purposes. Kai Yee escapes, however, and continues with his plan of enacting revenge on the Elders by ruling all magic.

Ah Mah does not want Juniper anywhere near him, as she is afraid that she will become as corrupt as he. So she goes to obtain the mystical sword of the Elders to prevent Kai Yee from getting to it first, but is stopped by Kai Yee himself. Juniper gets to Ah Mah just as she is collapsing from her battle with the much younger Kai Yee. Reprimanding her grandmother for not trusting Juniper with what is essentially her burden to bear and not Jasmine's anymore, they agree to fight him together.

As Kai Yee's statue is sealed away in a different location of the house, Ah-Mah sends Mr. Kellington at DaPheetes a Dragon Snot bomb.

Kai Yee: Old woman, you are not worthy of such an honor. You do not deserve the title, "protector".
Ah-Mah: Neither do you!

Ah-Mah: June, I forgot my staff, could you please go get it for me?
June: Yeah. (runs to get it)
Ah-Mah: Monroe.
Monroe: Right. (traps June behind fireplace)

Ray Ray: I mean, did you even SEE how much soda I drank today? (Monroe looks over and sees a huge pile of soda cans)
Monroe: Alright lad, (opens the chimney up) but i'm going to need your word as a gentlemen to- (Ray Ray comes out quickly and traps Monroe, then goes over to where June's trapped)
Ray Ray: Hang on sis, I'll have ya outta there before ya can say dragon boogers! (cut to June inside)
June: Ray Ray? (cut back, Ray Ray lets her out) You rule Ray Ray!

Ah-Mah: He is so determined, so full of potential, so much...like you.
June: You think I'm like him?
Ah-Mah: I don't know.

Ah-Mah: There is no greater champion than that child! On the best day of your life, you can only hope to be half the champion she is!
Kai Yee: Amusing... seeing as how today is my best day.

June (making fun of Kai Yee after she hit him): Hey, you ok? That look like it hurt.

June (making Kai Yee hit himself with a chain): Why are you hitting yourself?! Why?! Why?!

(June stops Kai Yee from destroying the Orb of Elders)
Kai Yee: It does not have to be this way! We could put an end to this, you and I. We could rule the world, together! (June pauses to to look away)
June: Thanks, I'll pass. (hits him) 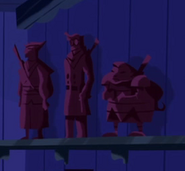 Jasmine using a Karakus stone to ward off the thieves.

One of the many evil beings Kai Yee faced as Te Xuan Ze.

Kai Yee as a statue by the elders.

Ah-Mah, Monroe and the kids using a magical tracker to find Kai Yee.

Kai Yee stealing the Sword of the Elders

Ray Ray coming up with a plan to escape his grandma's house.

Juniper in "Out of the Past"
Community content is available under CC-BY-SA unless otherwise noted.
Advertisement