Out of Charm's Way 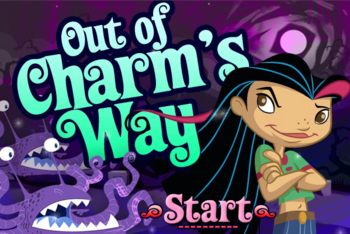 Out of Charm's Way was the third online game to be made based on the show and combines concepts, monsters and villains that have appeared in different episodes of season 1. The game released before it was Monster Mayhem

Currently unavailable for playing on any online games-collecting sites. Warning: The descriptions below have spoilers to the game.

June: Hey Monroe! Ray Ray found this weird thing in the park. Any idea what it is?

Monroe: Well, it's definitely a magic charm. Powerful too-- I can already feel my fur standing on end.

June: Well, then we'd better make sure it doesn't fall into the wrong hands. I'll check the park for any other magical doodads.

There are three areas, each of which have ten levels. During these you collect two different types of charms: jewels for life points and a bigger charm for a special extra; as well as new abilities/spells for each area.

You earn the right to a prize at the end which is a wallpaper that used to be downloadable on the Cartoon Network site.

Don't give up the fight! After all, those charms won't collect themselves!

Add images here from the game, such as screenshots.