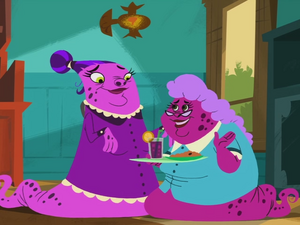 Margie and Eloise are two old monster ladies who are the founders of Country Cookin' Monster Snacks which makes Runey Stix. Un-beknownst to the majority of monsters, Runey Stix are what cause gigantic monsterism in 1 out of 4 monsters.

They appear in Food for Naught in season 3.

Margie is the smaller of the two, sporting half-moon glasses and a bright teal shirt, wearing her curly hair loose, while Eloise wears a dark purple smock and has her dark purple hair up in a bun. On the out-set they appear as friendly old ladies, even offering sweets and snacks to the main trio when investigated, but in reality, can appear menacing and scary as well.

They both appear to be a type pf snake-monster, possibly similar to naga.

When Juniper, Monroe and Ray Ray go to investigate, they are invited in by two kindly old monsters. Margie and Eloise are surprised to hear about the effects of the snacks and promise to put a warning into their ad about Tarabok weed, which is the main ingredient and the cause for the transformations. When June and co. see the ad though, it is small and un-significant, defeating it's purpose. When June, Monroe and Ray Ray return that night to secretly get rid of the Tarabok weed, they find the house well-guarded and that the two old ladies knew about the problems all along, but decided to keep the business going as it was bringing in good money.

At the end of the episode, their business goes bankrupt but they continue selling it in small numbers, which doesn't work without their manufacturing base. [1]