Marcus Conner is one of June's closest friends and her love interest. He is a cool relaxed guy who shows interest in June as a close friend (and possible girlfriend).

Him and June have a mutual crush on each other but as awkward fifth-graders, they are both also slow to admit any deeper feelings.

Marcus has two parents and no apparent siblings, possibly being an only child. [1]

Marcus has appeared in 8 episodes altogether as well as one short, Nice Weather.

Marcus is generally an easy-going guy who seems to get along with everyone, even June's self-appointed rival Melissa O’ Malley, who otherwise dislikes everyone. He gets along well with June and everyone else in their friend-group, as well as with Ray Ray, who sometimes picks up his calls to June when she's late to their meets and later dates, once even calling Marcus on his own, prompting him to wonder how he got his number, but they seem to be on amiable terms.

When it comes to June however, he can feel protective and jealous, such as seen in Who's Your Daddy? when a new boy in school was getting friendly with June and Marcus was getting bad vibes from him, trying to warn June about this new boy. Marcus un-knowingly turned out to be right.

He also likes anime and animated films, as seen by him asking June to an anime festival. [2]

From the blazer he wears, it is evident Marcus might be into sports such as football or something similar. He is also seen to be doing well in the Middle-school triathlon, despite actually going up against a demi-god, placing second in the boys try-outs and first in the triathlon finals. [3] He seems to be doing well enough in school that his academics aren't mentioned or brought, like with Roger, Ray Ray or Juniper.

Marcus at the museum.

Marcus greeting everyone else at the museum.

Marcus and June at the Orchid Bay Museum's mummy exhibit.

June and Marcus at their school dance, June inviting Marcus to dance.

June and Marcus finally decide to have a dance.

Marcus and June dancing at their middle school party.

Marcus waving away his jealousy with an awkward excuse.

Marcus being apologetic while talking to June. 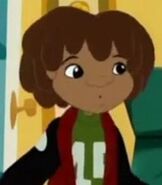