Lila the Sasquatch is the only female and only child Sasquatch in Orchid Bay, being significantly smarter and smaller than other Sasquatches. Because she is literally an advanced animal and not a human, she can see through the magical barrier just fine. She likes movies, especially big ones with big explosions. Although considered part of the main cast, Lila appeared in only four episodes, as she was not introduced until the third and last season. She first appears in Feets Too Big.

Due to growing up with a huge tribe of Sasquatches, Lila is used to dealing with problems on her own, helping others and finding resourceful solutions. She feels bad for her fellow Sasquatches but also yearns to have a life of her own and to know more about human culture. Before meeting with June, Ray Ray and Monroe, she used to sneak out of the Sasquatch village to see movies at the Orchid Bay movie theater. Lila claims herself to be an herbivore, although she was shown to have fangs when she was battling the Unglian Banticores with June . She helped June find her and Roger's parents (whom were captured by a lost Sasquatch named Charlie Paulsen), as well as helping her defeat a Brown-Back Mountain Troll and returning a mountain lion's cubs to their mother. Later on, the gang decides they can't leave her in the forest with the other Sasquatches, deciding to bring her back to the city, leaving her to live with Jasmine.[1] The next time she is seen in the show she has enrolled at Juniper's school to learn more about humans.[2]

Lila is eager to learn about human culture and becomes accustomed to the magical world as well, happy to live in the city and act as a human girl with friends and school-duties. She used to sneak into the movie theater when she had time off from tending to the other Sasquatches and likes movies with big explosions. Just from self-learning, she can read and write just enough to understand most signs and writing, although somewhat sparingly as she initially calls movies "moonies". Because of her life in the forest, she is also adept at using resources found in a forest creatively, such as when the electricity is cut off during a slumber party at Jody's place and Lila kindly offers to help with the other kids' hair-dos and beauty salon activities herself. She is also lightly self-consious about being a Sasquatch trying to fit into both the human and magic world as she admits to Juniper during the slumber-party. [3] She is fiercely loyal and believes in being good, as evidenced when despite Auntie Roon attempt to sway her to join the evil side due to Lila's true nature as neither human or monster, Lila subsequently rescinds Roon's offer and kicks the evil witch's butt. [4]

She is a close friend to June, they befriend quickly pretty much at the moment they met. June pities Lila's situation the most and introduces her to more human culture. Juniper also attempts to have Lila fit in more and befriend her own friends. They are a good tag-team for monster fights and have similar physical strength.

He has seen to have a crush on her even when she was hairy. Ray Ray likes showing Lila things he likes doing, like riding bikes or making school projects out of ear-wax.

Lila lives with Ah-Mah after her first episode and goes to school from her house. It can be assumed that they have a close mentor-student relationship as we see Lila tending to Jasmine when she is weakened and bedridden in Every Witch Way But Loose.

It is unknown how much they know each other but they are both successful as individual and supporting magic users and acknowledge each other as team members although Dennis seems to be lukewarm about her.

At first, Ophelia seems to think that Lila could loosen up a bit, but later warms up to her and finds her cool.

Jody warms up to Lila immediately, possibly due to Lila already being friends with June. She enjoys the haircare that Lila does during her slumber party.

Lila and Roger do not interact much, but Roger likes the fact that Lila is possibly one of the only known people to be able to handle his hair and make anything or any kind of hair-do of it.

Possibly because of her age and height, she passes for a human quite well, with a petite face and smaller facial features similar to that of a human child. At first she is like most of the Sasquatches. Though she is significantly smarter and smaller than the rest of her tribe, her body is covered in hair, save for her face, hands and feet. Monroe uses an Exfoliax Charm to help remove most of her excess hair so that she could appear as human as possible. She wears a necklace with three black teeth or claws hanging from it which can be seen both before and after she starts her integration into human society. After the Exfoliax charm procedure, she can also be seen wearing white tooth or claw nail-like earrings. Due to her sasquatch feet as well as possibly because of the discomfort of closed shoes, she cannot wear closed-toed shoes of her size, so she wears sandals instead. Blending into human society, she wears a long-sleeved brown sienna shirt and olive green pants, matching her brown hair and green eyes. Her hair is up in a sharp ponytail tied with a brown-red knot.

Despite being around the same height and weight as an older pre-teen or teenaged human girl, Lila possesses incredible superhuman strength inherent to her species that allows her to fight on par with Juniper. She was shown effortlessly lifting an enormous telescope belonging to Jody, who said that her dad would have a hard time lifting it up the stairs.[5] Her durability and reflexes are similarly enhanced, making her a potent fighter. During the 5th grade class presidenti election, she fills in for Juniper for a while and goes toe-to-toe with Thor's Valkyries.[6] In addition to this, Lila's life in the woods has taught her quite a bit about survival and grooming, such as her ability to navigate in the forest or knowledge of star constellations due to practical use for orientation.

Though she sentient and capable of speech, reading and writing, Lila is not a magical being. Rather, she is merely a highly advanced animal and as a result can see through the magical barrier. After being introduced as part of the team and living at Jasmine's, she has shown some considerable use in magic, such as wands and scepters. 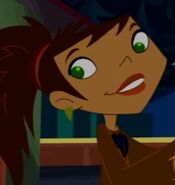 Lila being invited by Jody to her comet-watching slumber party, along with the others.

Lila helping Jody and June star-gaze with her practical knowledge of the star constellations.

June and Lila talking in the forest.

June and Lila in the forest.

Lila in Make Me Up Before You Go-Go, watching with the others as a "comet" falls.

Lila in the final episode.

Lila and the other's helping Ah-Mah