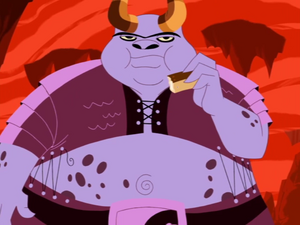 Kordoth the Conqueror is the father of the recurring villain Demoness and a demon from the underworld banished before June's time as Te Xuan Ze. He appears in seasons 2[1] and 3[2] in two episodes total.

Kordoth takes it easy and is not about the conquering life anymore. He affectionately calls his daughter doting names like 'muffin' and 'sweetie'. It is unknown what he was like before banishment but it can be assumed that he was a feared conqueror judging by how revered he was by his daughter.

Kordoth is hailed by his daughter as the most evil demon lord to have existed. He is made to be a big deal until he is summoned back from banishment with the help of her army of children and his daughter sees what has become of him. Kordoth has become over-weight and obese from doing nothing in banishment. His daughter is taken aback and disappointed in him, but can't do anything as a banishment stone is aimed at them by Ray Ray Lee.

Kordoth is there with the other monsters banished with the Demoness. As seen in the previous episode, he is snacking on something, this time potato chips. Later he is seen surprising June while she was gaining an upper hand on the Demoness. He catches her btu is distracted by mention of food. Later he is banished into the film realm's approximation of a Star Wars movie.