June's EGGcellent Adventure: Juniper Lee meets the Easter Bunny is the twenty-second episode of the show and the ninth episode of the second season. The episode is an easter special. It is also presented as a television movie with the credits different from previous episodes.

Easter Bunnies are suddenly refusing to give their painted eggs to the children, which disappoints Ray-Ray. June explains that there are thousands of them that live in Sweetland; a world of candy.

On the eve of the 7th annual Orchid Bay Park Easter Egg Hunt, Ray Ray is practicing to win the grand prize of twenty pounds of candy by less than honorable means, carrying water guns and a Turrakus Emerald which, unbeknownst to him, just creates barriers. Meanwhile, Juniper asks Marcus to go with her to the event (she claims it's not a date). Monroe tells Ray Ray that the Easter Bunny won't leave him any gifts if he cheats to win. Ray Ray thinks he's lying, but Juniper confirms that the Easter Bunny not only exists, but there are thousands of them. Monroe then tells the story about Sweetland, where chickens make the eggs and the Easter Bunnies paint and deliver them. They are then sent by a pair of Easter Bunnies to Sweetland to intervene in a feud between the bunnies and the chickens, the latter of which are being led by Monroe's father, William. Little do they realize that a blue-skinned enchanted rhinoceros named Mitch has set them up in order for him to take over the holiday and replace the candy and eggs with AA batteries and socks. Mitch releases a candy monster that June then begrudgingly battles. Finally, the monster is defeated and Mitch gets his just desserts.

The chickens and bunnies are reprimanded by their mothers and June finally gets to answer a call from Marcus and yells at Monroe and Ray Ray that it's not a date.

While June was tending with Monroe and William, Mitch was delivering his batteries and socks, but nobody cared.

Ray Ray in the credits titles.

Ray Ray and June a pile of candy, with storyboard credits.

June fighting a bunny monster with a sword while riding a chicken monster featuring the directing credits (Frank Squillace).

Creator credits at the start of the episode. 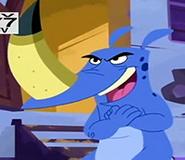 Monroe: (after Ray Ray eats pieces of Sweetland's nature) Not everything is made of candy. You just ate a tree, leaves and dirt.

Monroe: (after William sent a message) What's it say?
Rabbit: (reading) Well it says, oh my. It's a poem entitled,
My name is Monroe,
I'm a fat fatty,
I can't see my feet.
All I loves to do is eat, eat, eat.
(to Monroe) and eat, eat, eat was underlined 3 times.
Monroe: (grabs the letter and gets angry) Rabbits, prepare for WAR!!!

""Bugs and Thumper here better have some answers.""
―June

""The Chickens are revolting!""
― King Teddy