Juniper Lee Wiki
Register
Don't have an account?
Sign In
Advertisement
in: Characters, Female Characters, One Shot Antagonists,
and 8 more 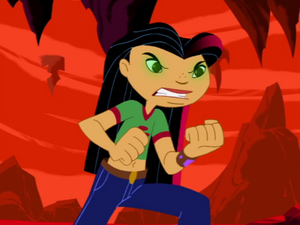 Juniper clone is an exact, but evil copy of Juniper Lee made via photo-replication by the Demoness with the intent purpose of getting her father Kordoth out of banishment. Because Kordoth was once banished by a Te Xuan Ze, a similar source of power was needed to un-banish him.

Juniper's clone looks exactly like Juniper down to her bracelet and hair. However, at certain times her eyes glow green, indicating the process with which she was cloned as well as being distinctly as evil as the Demoness herself. She acts almost the same as Juniper and talks almost the same way as well, but is much nicer to Ray Ray and Monroe. While this initially seemed earnest, it was actually just a way for her to find out info on how to un-banish Kordoth. Her mannerisms and fighting style are much closer to the original June than her personality, as they were both able to fight each other to a stand-still without breaking a sweat. When she meets and fights her originator for the first time, she aims an amulet at June stolen from June's room, which the latter takes an offense. She then shows Juniper ear-rings she took from her room as well, to taunt her. This could show that the clone was simply good at being annoying and taunting her enemy, or that June herself has a side of this as well.

Clone Juniper was summoned from a photo of Juniper Lee. When June was absent from her school's picture day and didn't get a photo taken of her (because of her zit-makeup being ruined), the Demoness didn't have anything to use to summon a copy of Juniper. However, she suddenly got the idea to clone June's friends instead from her underling showing the photos around. Deciding to take things into her own hands, she sends the army of evil kiddos to convince June to get to the underworld. Jody's clone gets impatient though and June is knocked out with Jody-clone's zappy evil powers.

Brought back to the underworld, a photo is taken of the unconscious Te Xuan Ze, on which the Demoness uses a method akin to developing photos and re-animating Frankenstein's monster. In a ark red room, the photo is left floating in developing fluid while green zaps of lightning from The Demoness crackle around the room. Upon "rising" from the developing photo, June's clone opens her eyes which glow a mischievous green. [1]

During the events in "Picture Day," Juniper clone is banished by Ray Ray after he notices that she's being too nice to him for no reason, making it clear to him that she couldn't have been the real June. It is unknown what exactly happens to or where in banishment Clone Juniper ends up in, but she is never seen or heard of again.