Jody Irwin is Juniper's best friend and usually the sunniest of the group. She tries her best to cheer the group up, even if it is in the most ridiculous of ways. June tries her best not to disappoint Jody, but being Te Xuan Ze, she ends up doing so despite her best efforts. Jody usually forgives her eventually.

Jody is always seen as a more positive of her group of friends but is often as much of a snarkfest as June or Ophelia. The three are quite different in personality and interests, but they get along well and are seen to have a similar sense of humor.

Altogether, Jody appears in 23 episodes; 8, 6, and 9 times respectively for each season as well as one short, The Bus Stop.

Jody is a chipper and cheerful pre-teen who enjoys normal pre-teen things, such as magazines aimed at her age-group, slumber parties, shoes and cute boy-bands as well as science, stargazing, doing homework and politics. She has a habit of organizing and cleaning things. Sometimes she can be a bit culturally insensitive such as when she spoke extremely slowly to June's 11-year old cousin from China who spoke English freely (Jasmine pretending to be a Lee family cousin as an emergency cover-up) and often shows the same optimistic obliviousness in other similar situations, such as when talking to June's great uncle Eddy.[1] This might come from a place of ignorance as her intent is often still well-meaning. However, just as Ophelia, she does sometimes dismiss Roger's antics as well, while other times laughing at them and sometimes being even more brutally honest with Roger than Ophelia. Just as June and Ophelia, she can dispense comebacks or jokes at others' expense, but oftentimes her insults fall short or backfire, especially if they are fully intentional or if she herself was hurt. Jody takes part of the Journalism Club as well as the Yearbook Club with June, Ophelia and Roger.[2]

She likes wearing blues, purples, whites and pinks in lighter, stronger or pastel combinations. In other outfits, she combines pink, blue and sometimes even bright yellow.[3]

Jody is a pale-skinned pre-teen with light blue eyes and medium-length blonde hair tied in pigtails with pink hair ties. Jody's every-day attire is an indigo hoodie with light pink stripes below the shoulders, a pale pink shirt underneath, dark blue pants, and light brown boots with white socks tucked in.

For formal wear, she wears a light blue dress with white trimming on the collar and puffy sleeves.

She is in the school news club as vice-editor with Juniper (chief of the club), Ophelia and Roger and enjoys activities such as photography and reviews.[4] She also likes collecting photos of shoes.[5] She is relatively average at sports, but likes taking part in school activities, such as triathlons[6] or even when running as class president against the schools' mean girl Melissa[7]. When she is worried, anxious or excited she will change clothing or outfits multiple times a day. Along with this she also has a habit of over-preparing and over-planning, making her similar to many real life kids and somewhat of a nerd and over-achiever in the eyes of her school peers. She collects shoes in her spare time and does photography as a hobby. By the pre-to-last episode of season 3, she is seen taking full charge of the middle school news-paper, but is so booked that she even gives Ray Ray a small movie-reviewing job. When there is meteorological activity in the sky, Jody follows it quite closely, even organizing sleepovers with her friends for it, so they can all see it. One of her biggest hobbies is collecting snow globes,[8] so much so that June's present to her is a rare limited edition snow globe of Orchid Bay City itself.

Jody is a good friend of June's and they consider each other best friends. She is patient and forgiving of her friends but it has been shown that she can be impatient as well. Particularly, when her photo-clone from Picture Day just gave up taking kidnapping June with stealth and decided to take matters into her own hands. As such, it is possible that Jody also possesses this trait but shows greater restraint due to not being an evil clone but a real person. Just like her friends, she cannot stand her older sister Rachel, but bears her anyway. She seems to have a bit of a complex regarding Rachel as her parents are more doting with her older sister than herself. It is shown though in an alternate time-line where Jody never existed to begin with, that Jody's father is saddened by having just one daughter. Despite this, her parents let her have a very big birthday party[9] so it is possible that they simply over-spoil her sister, so it unknown what else Jody thinks of her parents. Her dad has a big professional telescope on their house rooftop which he lets Jody use whenever there's a comet or other interesting activity in the stellar skies.[10]

She is very skittish and gets scared easily from even the slightest monster-scare. Jody has an inquisitive mind however and is not afraid to learn more about things she does not know about, such as when she there's a new student at school, or when she gets curious about June's books and magic items at the end of the series. This could be a suspicion she's had since the first episode as she is shown noticing June being "weird" and not talking to her almost immediately. When she gets an idea in her head and comes up a plan for something, she will be determined to pull through with it. Additionally, if it's for the sake of her friends, Jody will go along with any schemes Ophelia, she herself or even Roger have come up with. She is very supportive and protective of her friends and of June[11][12] and Ophelia[13] especially, sometimes even more so than of herself. 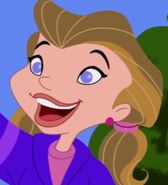 Jody's first appearance in the show.

jody and Ophelia talking to Roger.

June and Jody having a good time gossiping.

Jody's present from June - a snowglobe of Orchid Bay City, an antique which Jody has been looking for a long time.

Jody being proud of June.

Jody at the Orchid Bay Zoo with her best friends.[22]

...and waiting for a response from the boy.

Jody being amazed at Lila's hair-craft.