"Okay, bye, go, have fun! ....The babies are safe with their Ah-Mah."
―Jasmine to her son in Adventures in Babysitting

Jasmine "Ah-Mah" Lee (Chinese: 阿嬤; pinyin; literally "grandma") as Juniper calls her, is Dennis, June and Ray Ray's paternal grandmother. She was the previous Te Xuan Ze for many decades before being succeeded by Juniper.

Many in the magical world consider her to be the greatest Te Xuan Ze in existence; next to the rogue and corrupt Kai Yee, who is not remembered or revered as such.

When she was younger, she was very similar to her granddaughter when it comes to physical aspect, though with a few differences; Jasmine is a bit taller, still wears her hair in a ponytail, her cheekbones are a bit more visible, with her whole face shape being slightly more angular, resembling a triangle more or less rather than an oval. At 11-years old, Jasmine appeared to be thinner than Juniper.

The streak in her hair was a deep purple shown when she was aged down to roughly ages of 25 and 11.[2]

She is calm and deliberate in most respects but crude and tough when she needs to be. The 69-year-old gives June advice on dealing with the magical community and their expectations of her, and assists her when she is in serious trouble. As of the "Monster Con" episode, and is pragmatic, in the sense that she prevents June from shirking her responsibilities. While she primarily gives advice in most episodes, she is seen often returning to action as well.

After her father was no longer the Te Xuan Ze, Jasmine became the Te Xuan Ze in his place and gained all of the powers that are associated with the role of The Protector including superhuman strength, speed, durability etc. She also gained the ability to see through the magical barrier that prevents mortals from seeing magical creatures, and also acquired magical abilities of her own. As she served as the Te Xuan Ze and gained experience, Ah-Mah became a powerful and skilled user of magic. As she began to age past her prime, however, using these abilities began to wear on her physical being. Her stamina seemed to suffer the most, as she was unable to continue standing after two or three minutes of all out combat. She was effortlessly defeated by the strongest and "younger" Kai Yee and was forced to draw energy from the magical source itself in order to continue to fight him. This weakness due to age cements Ah-Ma as a former Te Xuan Ze, leaving the role and responsibility up to her granddaughter Juniper. 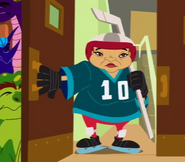 Jasmine as a jade statue in her foyer among the other memorialized Te Xuan Ze.

Jasmine citing the oath of the Te Xuan Ze in Out of the Past.[8]

Jasmine among her ugly fake mooseheads.