It Takes a Pillage

It Takes a Pillage is the third episode of The Life and Times of Juniper Lee in season 1.

Evil viking spirits take over Ophelia, Jody and Roger, leaving June, Monroe and Ray Ray to turn them back to normal before they wreck havoc and chaos all over Orchid Bay.

June and her friends are performing with their school choir at Orchid Bay Nursing Home. Roger finds a half-split talisman and wears it as adornment on all his other jewelery to impress his friends. They start the performance, with June on piano, when suddenly, the whole choir starts singing deep-voiced, one-by-one. Viking ghosts have overtaken their bodies and they go on town to wreak havoc and find the other half of the Medallion of Takar. June must stop them before they find this other half and make their stay in the kids' bodies permanent.

They chase the vikings to Takar Island where June confronts the viking leader and tries to get Jody's body back. June fights while trying to convince Jody's body that Jody must still be in there and manages to plunder the medallion from the ghost leader.

When Ray Ray also arrives on the roof, the viking leader falls from the bump of the door. He is grabbed by Ray Ray who jumps after and is grabbed by Juniper. June asks Monroe advice on how to get the ghosts out and after getting the short version, she crushes the medallion in her hand. This causes all of the ghosts to exit the kids' bodies but as the viking leader spins out of Jody, her foot slips out pf her boot and she falls down from the side of the building. In shock, June gets a determined face: she throws Ray Ray back on the roof and leaps into a run down the building to where Jody is, grabbing her and running into a safe landing. Waking up in June's arms, Jody is surprised, and confused about where she is or what she's doing but is sidetracked by being in the mall.

As she wakes, the other kids also exit the jewelry store and excitedly join her. Ophelia steps next to June and asks what possessed her to come to the mall. June shrugs and Ophelia replies with a "When in Rome..." Monroe and Ray Ray observe this and Ray Ray calls it a work well-done.

Ray Ray and Monroe talk about their mall loot on the ship, Monroe showing off his new perfume. 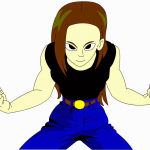