It's the Great Pumpkin, Juniper Lee

It's the Great Pumpkin, Juniper Lee is the four-teenth episode of the whole series and first episode of season two.

On Halloween, monster kids use a spell to dress as human kids for the night. Due to a monster kid wanting to stay looking human, all of them might stay human forever unless June gets a milkshake for the private contractor hired by him before midnight.

June, Dressed up as Elvis, is waiting for her friends to arrive so they can go trick or treating together. Ray Ray is excited about going from house-to-house but asks if monsters dress up too for the occasion, going around all hidden among trick-or-treaters. June points at some random non-costumed kids saying that there are a few around them already here and there. Confused at seeing regular human kids, Ray Ray asks for an explanation, which June gives as a really simple reason. Every Halloween all monster kids use a spell to dress as human kids for the night, just to fool around and do normal human stuff. That same night, while Ray Ray's hiding his candy stash from their mom, June is called out by a group of monster parents, saying they have a big problem with that same spell. June is willing to try out some different incantations and spells at first glance, but they explain that it isn't just some spell gone wrong and one parent steps forward, asking her son to tell 'em what he did. A monster kid called Evan has contracted an agent demon, Vikki Devyne, to leave the spell in effect over midnight, to leave him human forever. This unfortunately has affected all the other kids as well. Thanks to this deal Devyne, all the now human monster children are unable to change back into monsters. June strikes a deal with Vikki. However, she has to make deals to get a protein shake, from getting a few simple items to wrestling a demon that goes by the name of "Jordan the Destroyer" managed by a Don King-hairdo styled wrestling promoter before midnight, or else they will not turn back into monsters and remain human permanently.

June, Monroe and Ray Ray eat dinner at the Thompsons' house as thanks from them for fixing what Evan did. 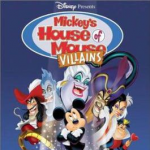