Juniper Lee Wiki
Register
Don't have an account?
Sign In
Advertisement
in: Magical Beings, Spirits, One Shot Ally,
and 5 more 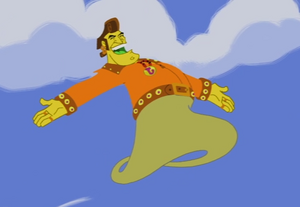 The Genie (also called Baresafer) is a magical being released from a small prison, such as a jar. This Genie in particular is fond of singing, especially about freedom and dresses like Elvis. Genies are good at sniffing out evil.

He appears in the episode It's Your Party and I'll Whine If I Want To . At the end of the episode, Juniper sees a chance to use the Genie to defeat that episode's antagonist - the Racatan, who the genie immediately detects as a great evil. Juniper explains that this is what genies naturally do.

His entire body is tinted yellow and he has white teeth, a green tongue and regular-looking eyes. When he attacks the Racatan however, his irises turn red.

The Genie happy to be released from his jar the first time.

The Genie happy to be released from his jar the first time.

A close-up of the Genie happy to be released.

Close-up of the Genie noticing something

The Genie attacking the Racatan.
Community content is available under CC-BY-SA unless otherwise noted.
Advertisement