Every Witch Way But Loose

Every Witch Way But Loose

22 minutes
Every Witch Way But Loose is the fortieth and final episode of the whole show and fourteenth episode of season three.

Auntie Roon returns and turns Juniper into a mindless monster in the attempt to use the Te Xuan Ze's power to shatter the three touchstones that maintain the Veil, and prevent humans from seeing magical creatures. With Ah-Mah out of commission, it's up the Ray-Ray and Monroe to return Juniper to normal before the world of magic is revealed to the mortal world.

Ray Ray tells the others in the basement about how they should form their own evil-stopping group, like their own Mystery Team; they start talking about their recent success and Lila wonders what banishment means. Auntie Roon and her fish ended up banished to a cave where the Biker Demons had also been banished to.

Juniper: I am but a hand, I am but a vessel, I am the stone that balances the worlds. 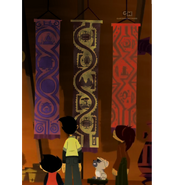 History of magic as recorded on veils and re-told by Monroe.