Juniper Lee Wiki
Register
Don't have an account?
Sign In
Advertisement
in: Kids, One Shot Characters, Minor Characters,
and 2 more 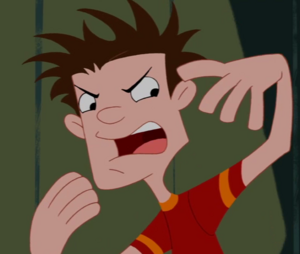 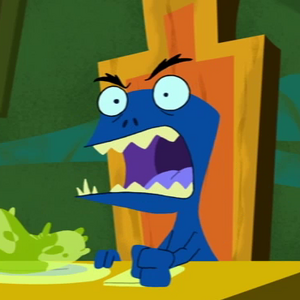 Evan Thompson is a monster kid who was accidentally responsible for the events in It's the Great Pumpkin, Juniper Lee. He is voiced by Dee Bradley Baker.

For Halloween, most monster kids disguise themselves as human kids just for fun and trying normal human things and turn back on the Eve of Halloween. Evan however had other plans and wanted to stay a human forever, contacting an agent demon named Vikki Devyne to organize the spell's permeability. This however backfired slightly as doing so made the spell permanent for the other kids as well. This in turn prompted all the kids' parents to band together to ask from help from the Te Xuan Ze Juniper Lee. Evan is shortly presented and outed as the cause of the parents' problem.

Evan appears as a shorter young boy with messy brown hair when disguised as a human and as a blue young amphibious monster with sharp teeth when shown as a monster.