This episode features the first time that there has been an actual in-world song on the show.

Juniper is practicing for the school talent show with her and her brothers' band, but when the humans of the whole town fall asleep, it's up to Juniper to investigate the Dream Realm. Turns out that Sandman Steven wants to leave the Dream Realm to conquer the Waking World, and has captured everyone and forced them to construct a portal to the Waking World.

Juniper, Dennis and Ray Ray are practicing in their basement but June and Dennis have disagreements over how to practice and how to play in the band. They aren't even screened by the judge of the show, so they get in without performing on the stage before. Juniper insists that they should have at least tried but Dennis says it was lucky that they got in despite June's lackluster guitar skills, while Ray Ray says it's just because of their skills.

June goes to a sleepover with her friends Ophelia and Jody and notices that they're already fallen asleep, even though sleepovers aren't for actual sleeping at all. When going around town she sees that everyone everywhere is asleep, including her own family and even Monroe. Ah-mah suggests she should visit the Dream Realm and that Steven, the person most likely responsible, is a big wuss who shouldn't be hard to negotiate with.

When investigating the Dream Realm with the ugly pendant charm that her grandmother gave her, June discovers that Steven is trying to cross over to the human world and take over. Because she is a visitor, however, she can't stay to fight without the pendant. Ah-Mah suggests she try sleeping this time. Gearing up with sportswear before falling asleep, June wakes up in her own dream ready to take on Steven, but is distracted by her crush Marcus appearing out of nowhere. Just as they're almost about to get married, June realizes thanks to dream-Monroe that they're only eleven and that this is all fake. She exits Marcus' dream. She confronts The Sandman, who beefs up and pulls her into "her worst nightmare" - a school play where she's the lead and can't remember her lines. Juniper isn't bothered by this however as she explains that she knows that it's a dream and "Ophelia would never be the tin-man."

Chasing Steven through all manner of dreams, June finds that the talent show judge is a fan of punk-rock and finds ease in the thought. Thinking that he has lost the adamant Te Xuan Ze, Steven quickly climbs the stairs built for him by the mind-controlled sleepers. Leading to the portal out of the Dream Realm, he almost reaches it but Juniper jumps through another portal and destroys his portal, freeing the enslaved sleepers in the process. He ends up falling into the dream of a marooned man trapped on a deserted island.

The band is about to perform at the talent show and knowing that the judge is actually a fan of punk-rock, she assures Dennis that they'll do well, despite her getting little sleep at night due to secretly saving the city.

Juniper shows Ray Ray the dream realm and they visit Monroe's, finding that he still misses that Frisbee he lost weeks ago. 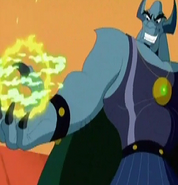 The Sandman being intimidating.

June's dream when entering the Dream Realm through sleep.

The kids' band performs successfully at the talent show.

June ending the performance at the talent show.