22 minutes
Ding Dong, the Witch Ain't Dead is the seventh episode of The Life & Times of Juniper Lee.

Many years ago, there once was an evil witch named Auntie Roon who had battled the mighty Te Xuan Ze of that time. She was defeated and also banished at the same time. Many years later, a 10th level Warlock has gotten together with a Pus Goblin and an Antelope Snake to release Auntie Roon at the once sacred grounds where the Orchid Bay Mall now stands.

Jasmine recounts the tale of a battle between a previous Te Xuan Ze and Auntie Roon. Looking at the image of her in the Te Xuan Ze book of magic, June just comments with surprise that she "rode a guppy". Ah-mah agrees and tells her not to worry as there's no way she'd be able to come back because it would require three unlikely magical creatures to make a deal which would never happen. The camera then cuts to those exact three types of monsters shaking hands agreeably. Having summoned Auntie Roon from banishment, they agree to release her in exchange for a boon, gathering some kids at a mall. Confused about what a "boon" is, Auntie gets out of them the real reason for summoning her; They're gonna eat the kids.

June, Jody and Ophelia over-hear on the radio that their favorite band "Ambiguous Angst" is having an Album-release at Orchid Bay Mall and decide to go, bringing along Roger, Ray Ray as well as a reluctant Dennis left to babysit them. The line for the music shop is so long that they wait there for hours, to the point where already time for Ah-mah to pick them up with her car. June goes to stall and gets out only to discover that her grandma isn't there yet. Just then, Aunti Roon enters the scene to fill in her part of the deal, a boon with the three monsters who summoned her.

As Roon unleashes chaos in the mall by bringing down the Veil, she discovers that there's some "good magic" nearby and traces the smell to Ray Ray and Monroe cowering behind a stall. As the two get on her nerves, she threatens Ray Ray enough to yell for June, who hears the cry and overpowers Roon's minions. June makes a crashing entrance through the roof of the mall, revealing herself to her friends in the process.

A fight ensues which becomes similar to the battle between June's ancestor and Auntie Roon 400 years prior. Roon's lizard-monster knocks Juniper down but Monroe runs there again to the rescue, banishing the monster as well as Roon and her fish.

June rises up to her friends praising her but Jasmine appears beside her and tells June that they must take it back. June pleads with her because it would make her life so much easier and less weird, but Jasmine explains that Roon took down the veil so it needs to be un-done. June reluctantly complies and just asks what they need to do now. They summon the elders of magic

After the summoning ceremony, time is re-wound to the moment before June and friends over-hear the band album announcement. The only ones to notice are June, Ray Ray and Monroe, as things start to carry out the same way. June shuts down the radio and asks her friends if they would like to watch something on pay-per-view.

Auntie Roon and the monsters who summoned her are in Banishment Court, sentenced to a life on a farm. This turns out to be a real farm. Auntie comments that she would have preferred being eaten.

In order of appearance:

Roon confused about the "boon".

Roon and her army of flying securitos trolls.

Auntie Roon glowers over a mall-full of kids triumphantly.

Ah-Mah telling June that they have to summon the elders. 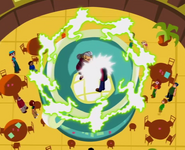 Juniper and Ah-mah summoning the elders.

Turning back time at the mall.

Banishment Court - Outside of Time

Roon, her shark and the demons at the "farm".