The Demoness is the daughter of Kordoth the Conqueror, a legendary warlord who was banished to the spirit world centuries ago and the only one capable enough to bring him back from banishment.

Centuries after her father's banishment, she has finally figured out a way to free him indefinitely, by harnessing the power of the Te Xuan Ze. And the only way she can do that is to clone Juniper Lee, using an image of her frozen in time (a traditionally-developed photo).

In the end the Demoness does manage to free her father just to find he isn't quite the monster he used to be, and June finishes things off by banishing both of them.

Cordoth's Daughter makes her return when she plots to bring 500 kids into the Realm of Barandom so she and her father can be free again. With Ray Ray captured, June ends up trapped in the movie. Ray Ray and Monroe must get June out of the movie so that she can defeat The Demoness and get back to Ophelia's film shoot.

As a demon, The Demoness has many abilities in dark magic.

Mastery of the Dark Arts: The Demoness has proven to be well versed in black magic, having full knowledge of banishment spells, witchcraft, and even knowing the ways to clone a human being.

A group of members of the magical community who have followed Kordoth in the past, and wish to see him freed from banishment. Naturally, as his daughter, the Demoness is the leader of this cult, and seems to be the only one making any real progress in actually freeing him.

Opening a gathering to bring back her father on "hallowed ground".

The Demoness commanding her hench-monsters.

Ordering her lackey to pose as a photographer and to be done on time.

The Demoness completing her plan to summon her father back from banishment.

The Demoness displaying her evil laugh among blasts of lightning.

The Demoness vs Juniper. 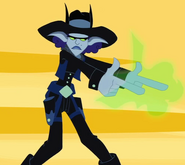 In a cowboy western world, wearing an outfit with an appropriately evil black hat.