A Darnock Demon is a magical creature which is able to siphon the life-energy of anything it touches and even harness its' magical energy, effectively sucking it dry like a bat.
The one darnock demon we see usually appears as a scrawny purple demon with long pierced ears and a skirt or loincloth. When it absorbs the energy of something it takes on the characteristics of it's victim or target, such as when he absorbed a rock and a tree, he took on colors and other features of these things, or when he assumed characteristics similar to a Te Xuan Ze and usually becomes much larger. It runs on all fours but walks on his legs too.

It has a scrawny distorted voice but only uses it when at full absorbed power.

The Darnock Demon which appears in the show used its' abilities to battle the two Te Xuan Ze's Juniper and Jasmine Lee. When he accidentally zaps the energy of Jasmine, he plots a plan to take all of the Te Xuan Ze's magical energy as well as the energy of the Magical Elders and thus take over the world of magic. This makes him a bit similar to another villain that appeared before him in season 3, Kai Yee, who had a similar scheme to use the magic of the Elders against them.

The Darnock Demon after absorbing energy from a rock.

The demon after absorbing energy from a tree.

The demon being attacked by Jasmine and Juniper.

The demon after having absorbed energy from sacred grounds of the Te Xuan Ze. 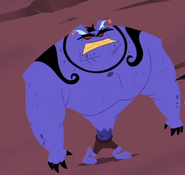 The demon in his biggest form after ahving absorbed energy from Jasmine and the Elders.

The demon after absorbing energy from a turtle.
Community content is available under CC-BY-SA unless otherwise noted.
Advertisement