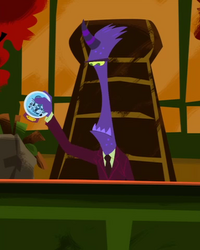 DaPheetes is a monster company that makes sneakers for female monsters. Their headquarters are where Kai Yee's statue was hidden by an executive employee of the company named Kellington. This monster is also responsible for bringing and blowing up a snot bomb in Jasmine Lee's house.

It is unknown what else the company did but upon seeing Kai Yee's statue and what Kellington planned to do with it, the company's CEO wondered why he was doing it in the first place if all the company actually does is make sneakers for lady monsters.

After Kai Yee's escape, that same CEO fired Kellington on the spot.