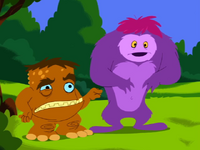 Cletus and Gus are two monster best friends who live somewhere in June's neighborhood and visit the kids often whether they have a magical or mundane problem. They are usually invited to group monster parties or gatherings at the Lee household as well, and both seem well-informed on monster history and customs. Gus is the smarter of the two and sometimes speaks in more unusual or sophisticated language and terms. Cletus has attention and memory problems and likes snacking on anything, with his friends sometimes having to stop him from doing it. Both enjoy watching monster wrestling matches on television.

They both have wives and kids who appear in "It's the Great Pumpkin, Juniper Lee". Gus' wife seem to be a palette-swap of Cletus who has a head full of hair, a dress as well as lipstick applied, possibly making Gus a brother-in-law to Cletus.

Cletus is voiced by Jeff Bennett and Gus is voiced by Bradley Dee Baker, both regulars on the show voicing different antagonists such as Loki, Skeeter, Mitch the Enchanted Rhinoceros and Taylor.