September 15, 2006
Citizen June is the thirty-first episode of The Life and Times of Juniper Lee and the fifth episode of season three.

Jody is running for class president against Melissa O'Malley to rebel against her bullying, but when Melissa runs a smear-campaign against her, June agrees to running as president instead. Thor returns when he pursues a Vindolf Hobgoblin to her school which is hiding in the school. If the creature isn't found soon, Thor will annihilate the entire school grounds to take out the monster.

The episode starts out with June introducing Lila to some concepts in school and Ray Ray encouraging Lila to try riding a bicycle, which she turns out to be good at. As they approach the school, June explains that it's time for class president election again and that it's probably going to be Melissa O'Malley, again, because no one dares to run against her, not even the older kids. Having said this, Jody suddenly chimes in with a "Guess who's running against Melissa O'Malley for class president!" to which all three stand there flabbergasted by this. Jody is positive and energetic about this but as the campaign continues, Melissa sears Jody's image and good reputation with a fake videotape, destroying Jody's confidence in herself. June goes out to look for Jody, but as she is comforting her, she notices a big thunderstorm brewing. Trying to get out of the conversation without leaving Jody sad, June promises she'll run for president instead. Descending on the school, the source of the thunderstorm turns out to be Thor and his Hammerettes. As June stops Thor from striking down the school with his hammer, he gives her an ultimatum to find the Vindolf Hobgoblin in an hour, or the entire school will be destroyed by it unless Thor does it first. June manages to run the presidential campaign while Lila, Monroe and Ray Ray search for the hobgoblin. Meanwhile, The Hammerettes get bored and tell Thor they're going to get rid of the hobgoblin themselves. As Lila and Ray Ray deal with The Hammerettes, the Vindolf escapes the school and starts growing heads just as June was about to stop it. Busy with the Vindolf, June is missing from the last presidential speech and Jody and the rest of the school body looks down-trodden and defeated. Seeing this however, Ophelia decides to take the spot for the speech herself, coming out with a completely honest opinion about Melissa while also speaking for the whole school about Melissa's tyranny and unfitness as president. After June has unexpectedly defeated the nine-headed Vindolf Hobgoblin, the whole class hears in about the election results. Turns out everyone elected Ophelia, even though she was not even on the ballots. Ophelia is in surprised shock from this as Jody tells her not to worry, as she'll be more like a figurehead while Jody leads from behind the scenes.

June: (smugly to Ray Ray, after he shows Lila how to ride a bike) Well, aren't you the little gentleman.
Ray Ray: (mildly) Shut up.

June: (to Thor about destroying her school) You can't!
Thor: Sure I can.
Hammerette #1: No sweetie, I think when she says "you can't" it means she'd rather you not.

Thor: You're scuffing the locks.

June: (looking for Jody, who ran out of the classroom, feeling upset because Melissa badmouthed her) Jody?! (finds her crying under a tree) Oh, Jody, don’t cry, okay? Look, Melissa’s a jerk. And everybody knows it.
Jody: (upset) It’s not my fault I’m not the coolest kid in school. Or prettiest, or the most popular.
June: Oh come on, Jody, you’re cool, and pretty and popular, relatively speaking.
Jody: I'll never win the election now!
June: Sure you will.
Jody: No! The only way I'd win now is if I had... (June's bracelet starts to glow, she sees dark clouds forming near her school, she gets more nervous as Jody talks) ...somebody to campaign. They didn't have to be popular, but still known to the public. I'd need somebody who's smart, good at politics, and somewhat cool. (looks at June) June! Why don't you run for class president? It'll be fun, we could beat Melissa O'Malley!
Jody: ...And I'll be your manager!
June: Jody I-
Jody: I'm not leaving 'till you say yes! (the clouds get bigger)
June: Okay! (she runs toward them)
Jody: Perfect! Now, I'll just need a speech.

Kid #2: My locker sticks every now and then, and I'm pretty sure I'm not the only kid who deals with this. How would you help me solve this problem?
June: Well, you could try some oil, that's what my locker needed.
Kid #1´: Melissa, how do you respond?
Melissa: I don't think we just need to temporarily repair one locker, I think we need a whole new set of stick-proof lockers for us and generations to come! And she has ugly shoes. (the crowd laughs)
June: What? But I had gym today, I couldn't wear the cute ones!
Jody: She's getting eaten alive out there, switch to plan B! (they signal her to switch plans)
June: Ok, I know you guys are ready to vote for your next president, question is though, are you ready-(swipes into a KISS costume) TO ROCK?! (smoke covers the stage, Melissa gasps as June starts playing guitar and Ray Ray and Dennis, also dressed up as KISS, come up behind her onstage)

Thor: (looking at the zoo brochure) Ooh, they've got llamas! I loves me some llamas!
Thor: Anybody who's bored, raise your hand. (he and all the Hammerettes raise their hands) It's official, welcome to Boresville, population: Us.

June: Uh Jody, I have to go to the bathroom.
Jody: But you're just about to give your speech!
June: Yeah but, when you gotta go...
Jody: Okay, make it quick. (June runs off, Jody calls after her) And no handwashing! Hygiene will have to wait!

Ophelia: (giving June's speech) Isn't it time we show Melissa just how SICK OF IT we are?!

June: (to Ophelia) Relax, you'll be drunk with power in no time.
Ophelia: This couldn't get any worse.
Roger: Hey uh, if you're lookin' for a first lady, I'm your guy.
Ophelia: And there it goes. 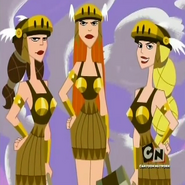