Boomfist is a comic book superhero who is a favorite of Ray Ray's. He was released from his comic books by Ray Ray to combat Wrongness in Bada Bing Bada Boomfist. While the later was accidentally zapped with an animate spell meant for bringing inanimate objects to life, Boomfist was Ray Ray's request of the same spell by the monster responsible for Wrongness.

As a comicbook character, Boomfist seems to be a reference to many existing popular superheroes, especially long-standing characters; He has a tragic back story (like Batman and Superman but slightly more dramatized), over-dramatizes, speaks in quips, fights a villain that is just as silly as him, belongs into a league of heroes, tries to get kids into being his sidekicks (as seen by June and Ray Ray) and spouts morals that go against any parental logic. As such he is probably a parody of superhero comic books from the nineties. Many of his hero allies also appear in cameos on tv screens seen in the show.

He is voiced by Dee Bradley Baker.

He appears in Bada Bing Bada Boomfist (season 2) and Sealed with a Fist (season 3). There are videogame versions of him appearing throughout the show as well as a burger joint in a Bigfoot village in Feets Too Big. 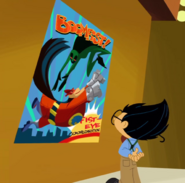 Boomfist on a movie poster.

Boomfist flying with Juniper and Ray Ray in tow.