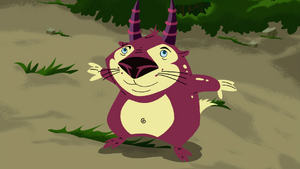 Bombats are a dangerous magical creature that can be seen by non-magical beings. The main danger is that within 24 hours of being released in a human establishment, they will completely wipe it out of existence. Bombats are shape-shifters, which is another reason why it is essential to chase and trap them early on.

It appears in Dog Show Afternoon in season 2 and is voiced by Kath Soucie.

Wherever the bombat appears, the place that it is released at becomes completely obliterated after 24 hours have past. This is why Bombats are usually kept trapped inside caves behind rocks covered with protective spells. Because it can travel at high speeds, almost exceeding a Te Xuan Ze and can shape-shift as well, it is imperative that the are kept under tight lock and spell.

A didgeridoo leitmotif can be heard whenever the bombat appears on screen in its true form, so it can be assumed it might be of Australian origin.

Write the second section of your page here.