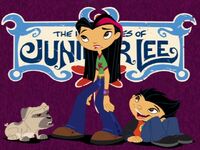 Beach Blanket Monroe is a The Life & Times of Juniper Lee short that aired on January 6, 2007 and ran between commercial breaks on Cartoon Network. It is the fifth of shorts to air, after Nice Weather and before Big Monster in My Backyard.

As June is relaxing at the beach, two monster kids with five eyes throw Monroe around like a football. She rescues Monroe, but keeps the monster kids happy by giving them Ray Ray to throw around, much to his entertainment.